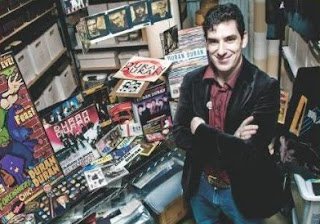 He hails from Seattle, Washington...a man on a mission...to add to his archive every piece of Duran Duran history he can find. He is the man...'Durandy' Andy Golub. If you've seen the movie 'Something You Should Know', you will see him in it. If you go to his website, you will be awed by his collection of Duran Duran throughout the years...ranging from posters to books to magazines to promos and rare photography.

Andy says this about himself on his site..."For a long time I have believed that it’s best if I simply blend into the background as the archivist, working on finding new artifacts and keeping a low profile. However, fate has had other plans in mind. I’ve been fortunate to enjoy some terrific recognition for what I’m trying to accomplish, and I’m very grateful to find that others are so interested in learning more about how this collection came to be."

When I first approached Andy, it was like it was meant to be. He was extremely excited about our effort and gracious in his support of it. If you look through the petition signatures...you will see his name there. Since then, I have had the joy of finding messages in my voice mail from Andy encouraging me in the DDTTRH cause and I have enjoyed a growing friendship with him.

Andy has made news and caught the attention of Duran Duran in his efforts. He is known and loved by many in the Duranie community (including by myself). I am pleased to present to you DDTTRH's interview with Durandy.

Kirk, DDTTRH: When did Durandy officially start? How did 'Durandy Productions' come
about?

Andy: For over twenty years I have cultivated a relationship with the DJs at a local radio station. It began with me calling in and simply trying to raise the level of Duran awareness at the station. I'm not exactly sure whether it was the DJs who christened me Durandy or if it was a self-fashioned moniker, but the station soon realized I wasn't going away and my passion for the band translated into delicious sound bites on the air! I like to think it was fate that gave me a name perfectly suited for DD devotion. I've been asked about legally changing my name to Durandy. It would be great to take my passion that far but I believe I've put my poor family through enough as it is.

Durandy Productions reflects how my archival endeavors have gravitated toward a mature, professional direction over the years. What began as a meager but determined collection in my bedroom has now blossomed into a comprehensive archive of the band's career. My collection has found purpose well beyond my personal satisfaction; from usage in television broadcasts and online web features to exhibits in the Rock & Roll Hall of Fame, I've enjoyed many opportunities to educate, illuminate, and commemorate the band's career. Mementos from Duran's past have intrinsic value that only continues to grow as new generations discover the band and lifelong fans strive to embrace their icons with fresh perspective.

I adopted the name 'Durandy Productions' to solidify my archival efforts under a professional entity. Christine is a critical part of DP as her photography allows the archive to be enjoyed and fully utilized. A remarkable but lesser known aspect of Christine's contribution is her collection of Duran's audio/video releases. With thousands of vinyl pressings, CDs, cassettes, and videos, her archive stands alongside my own as a testament to Duran Duran's prolific catalogue.


Kirk, DDTTRH: I was really excited when I saw you recently on the 'Something You Should
Know' fan documentary by M. Douglas Silverstein. Tell us how that came
about!

LOL! Being a part of M's film has to be one of my life's greatest thrills. It started in Costa Mesa, 2003. I had just seen the reunited band perform for the first time and I was delirious with euphoria, an absolute high that I know we can all relate to! There was a small camera crew outside the venue and spontaneous interviews were taking place. Fans were pouring their excitement out to the cameras and a friend of mine quickly got the crew's attention, insisting they talk to me. Once I was asked if I enjoyed the show, the floodgates opened and I held court right there on the sidewalk, gesturing like a madman, proclaiming my eternal love and admiration for Duran Duran. I was only reminded of what I had actually said when I saw the final cut of the film. The best thing about that moment was knowing there were so many fans who knew exactly what I was feeling. That's a powerful, emotional connection, and it helped ease the slight discomfort at seeing my dignity so easily surrendered in front of the cameras! But passion for Duran has always been worn on my sleeve and it apparently resonated with M Douglas. The next thing I know, I'm being contacted for a full interview and tour of the archive with a camera crew behind me.

One of the most compelling motivations behind my archive is oriented around my connection to the global fan community. In light of that, becoming involved with M's film felt particularly meaningful as the documentary captures the common experience that draws us all together. I have never felt more proud to belong to such an amazing group of people.

Kirk, DDTTRH: Ever since I approached you Andy, you have been extremely supportive of me and this effort. At times, I don't feel like I deserve it. After all,
while it is true that I've been a fan of Duran Duran for many years and
their music has inspired me at the best and worst times of my life, I have
only recently appeared on the 'Duranie' scene.