DDTTRH on recent Duran Duran comments about the Rock Hall 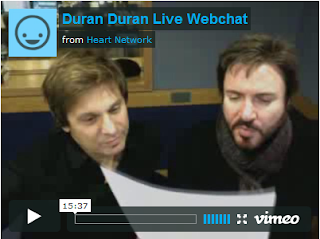 Duran Duran's music has an 'edge', which is what makes it so special to so many of us...DDTTRH now has an 'edge' which is inviting the Rock Hall to change its ways. What better way to conduct an effort, than to emulate the idealogy of the band it seeks to honor. Read on!

In case you didn't know, Kirk (DDTTRH) gave Duran Duran a question during one of their recent web chats:

WebChat Interview, 1/25/10, Kirk's question at around 7:41
Heart, Click this link to access it: http://www.heart.co.uk/showbiz/webchat/duran-duran-live-webchat/ "Simon: It's a long one, that can be your bit.

Roger: Kirk this is from...I know the Rock and Roll Hall of Fame is political and one would question their choice of artists in many cases. However, there are amazing bands that have been inducted like U2, Michael Jackson, Michael Jackson...that's not a band...'

Simon: No, I like it, its quite Shakespearean actually.

Roger: In my mind, Duran Duran is legendary and many Duranies feel the same. If the Rock Hall called you and said they wanted to induct you, what would you say?

Simon: Ummm...I have to say personally I have a bit of a problem with it, I find its that whole kind of respectability...'inducted into the Rock and Roll Hall of Fame'...I find it all personally a little bit pompous...the idea of having to put on a black tie rock and roll event is just...seems all wrong to me.

Roger: I would agree, its not something that particularly feels important to us at this moment...like something we 'must have' you know.

Simon: Its funny how things like this can come along...people can...they impose themselves on...the Rock and Roll Hall of Fame has imposed itself on the industry...and say 'Right! We are setting ourselves up as this body who decide who deserves to be in this Hall of Fame and who doesn't.' And I think its completely bogus. I really do. Especially when you've got you know when you've sold as many records as we have or had as many people come to concerts as the bands who are not mentioned on this list.

Roger: I'd agree...totally agree with that."

Here is DDTTRH's reply to this...

Listening to Duran Duran's comments and pondering them as I have over the last week or so has really made me think about what this effort really is about.

Is it about just promoting their induction to the Rock and Roll Hall of Fame? No, I don't think so.

Is it about building awareness of the band and energizing the Duranie community? Definitely YES.

Is it about getting bands and artists (thanks to Roger for pointing out to me the distinction...[:) to speak up about Duran Duran and how they've been inspired by them and how they think they are legendary? That would be another BIG THING YES.

That leads to the question then...why promote the Rock Hall? Well, where else on earth are artists and rock history celebrated in such a way? Here is the Rock Hall's mission statement:

"The Rock and Roll Hall of Fame and Museum, Inc. is the nonprofit organization that exists to educate visitors, fans and scholars from around the world about the history and continuing significance of rock and roll music. It carries out this mission through its operation of a world-class museum that collects, preserves, exhibits and interprets this art form and through its library and archives as well as its educational programs."

Is it really an honor to be inducted to the Rock and Roll Hall of Fame? Many do think so. In a heartfelt speech in NY to induct his friend, John Lennon, Paul McCartney says: "Thank you. Thank you, New York. Thank you. It's a privilege for me to be able to do this tonight, and come here... So now, years on, here we are - all these people - here we are, assembled to thank you for everything that you mean to all of us. This letter comes with love from your friend Paul. John Lennon, you made it. Tonight you're in the Rock and Roll Hall of Fame. God bless you. Yoko and Sean." Source: http://rockhall.com/inductees/john-lennon/transcript/paul-mccartney-inducts-john-le/

If being inducted was not an honor, imperfect organization as it is, I for one am not sure Paul would have said this. I agree that the Rock and Roll Hall of Fame is not perfect and perhaps the way it works and inducts artists may be controversial, it still though is a unique and special place for bands and artists to be honored. If you haven't been, you should go. Its displays are great and it treats each artist it shows with respect and the dignity they deserve. At DDTTRH we strive to get Duran Duran noticed in the music community and in history, and in our minds, this is a good way to do it.

In fact, given what Duran Duran has said about the Rock Hall...

At DDTTRH, we officially invite the Rock Hall to return to its former glories, to really examine its way of inducting artists, and become even more meaningful than it is today. If you are going to impose yourselves on the industry, keep it real! You are for the world, not just the US...and you could use some 'New Romantic' flavoring.


Ladyaslan:
I think you had a good retort there Kirk.....but most ppl, bands, and artists would have said or have said similar salutations about the Rock Hall 'cause (referring to Sir Paul point you made...) well...they ( the bands / artists ) are a bit on the spot and usually would say some sugar sweet goodness about the Rock Hall....but then you had The Sex Pistols that told them where to go and how to get there and basically piss off...(that had radio play from terrestial to satellite radio and from the US to Russia) that was when the majority started to call into radio stations and e-mail ppl in a broadcasting arena to say 'yea the Rock Hall is pompous'.

I think Kirk is on to something with getting NEW flavours into the Rock Hall whether it be "New Romantic" or more Punk and even Goth and Industrial bands ( Siouxise and the Banshees-Goth....Skinny Puppy or Nitzer Ebb-Industrial, The Damned The Cramps-Punk, Human League, Roxy Music New Wave and lets not forget The Cure, Depeche Mode, Tori Amos and even Sinead O'Connor to drop some names ) look at KISS and Sonny & Cher-they have had the screw from day one...why they rocked the charts and arenas too and sold LOTS of merchandise and even lent their name to philanthropist efforts and they have yet to even get an invite as well.

So I think on top of "promoting" DD and their new album and past work we should also educate the Rock Hall that the 80's and bands and artists from the 80's were NOT cotton candy acts and they actually defined an era and gave the world lots of fun songs regardless if said band had 10 #1's or just one MOST of those songs are still faves among ppl going out to parties and bars and house bands....kids that were not even born in the 80's LOVE 80's music. There was something innocent yet a little naughty about the songs we love-look at Frankie Goes to Hollywood "Relax" LOL LOL we all know what that song is about now!!! But as kids ( if you're old enough lol ) we just loved the beat and the melody and it was NOT detrimental to our innocent little ears, we danced all night or roller skated to it. Unlike the music of the past 10-15 yrs where lil girls are dancing like 3 cent hookers on a pole and all the F*bombs and 'nigga' this and that in music of today......trust me I cuss like a sailor lol but even I am like DAMN what happened to music?!?!

Duran Duran, the 80's and ALL the other bands should get their moment where they are told by fans and record companies, and the quasi-like Jackasses at the Rock Hall that DAMN you did a bang up job in your prime and have grown and expanded your music with integrity and an ever growing talent.......

We should have our ppls and Duranies write up a letter or we provide a template and they can download it where we state the obvious.....something to the effect there are a great deal of genres out there and they are discriminating against bands that 'they' don't like or understand and ignoring the fact that there are still fans out there that support and drive miles upon miles to see these greats from the 80's.

There are more flavours of ice cream out there than just vanilla and chocolate....hence the Rock Hall needs some major change in attitude and perhaps a lil re-education in what music really is and what it means to the old and new fans. The world has enough Beyonce's and GreenDay's its time to say thanks to the bands and artists that paved the way....look how many bands have either 'borrowed or stole riffs and melodies from the 80's...did they ever say thank you?

Puff Daddy re-did and ripped a Led Zeppelin tune and Bone Thugs and Harmony jacked a Police/Sting song and yep ruined it as well....where was the thanks to the bands / thanks to the 80's era for providing them with the beat and melodies they "took or borrowed".....the Rock Hall needs a can of whoop ass opened and a new set of ppl either making decisions or at best pointing them in a new direction.....just saying lol. Well that is my 2 cents....discuss ( lol like coffee talk )

Kandice:
Wow to both of you... What more is there to really say?!? I think both you and Anitra hit "the nail on the head".

I def. like what Anitra said about using a template and having our ppls send in letters etc.. It is time for a Rock Hall change, how cool would it be for us to be behind it! :D

Jason:
Puff talked shit about DD!!?? What did that no talent say?

Christian:
It almost seems like they don't want to be in or couldn't care less. I think it has all been covered by the previous emails.
Posted by ddrockhall at 11:52 AM