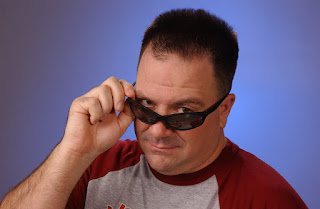 Our petition Duchess, Kandice, knows Steve Spears (also from Florida). He
is the news editor for the entertainment section with the St. Petersburg
Times. If you go to his blog, which can be found at
http://www.tampabay.com/blogs/80s/, you can tell that its all about the 80's...the era of breakdancing and parachute pants (oh my..I can't believe even I wore those things), Ronald Reagan, amazing 80's bands (like Duran Duran), Pee Wee Herman, Ghostbusters, and many other crazy things. He's on Facebook, he's on Twitter, he even has a podcast on iTunes.

Kirk from DDTTRH presents Steve Spears, from the St. Petersburg Times and Stuckinthe80's!!!

Kirk, DDTTTRH: So Steve...how do you know Kandice (our Petition Duchess)?

Steve: I am one with the Duraniverse, so fans like Kandice can't do the
Re-flex (flex-flex-flex-flex-flex) without me noticing. Plus, she's an
enthusiastic member of the Stuck in the '80s Nation.

Kirk, DDTTRH: Many people say that Duran Duran is just an 80's band. For
someone that is 'stuck in the 80's' as you are, what would you say to this?

Steve: They are the ultimate '80s band in most every way: the fashion, the
music, the videos. They represent everything that was truly great about the
decade. And much like the '80s themselves, they hit a speed bump right
after Live Aid. If they hadn't lost their momentum after that show, who
knows how much better my beloved decade could have been? But obviously they
continued to motor on through to today -- much like REM, U2, etc. So while
they are the ultimate '80s band, they're not "just" an '80s band.

Kirk, DDTTRH: Tell us about how 'Stuck in the 80's' began? What inspires
you about the 80's so much? I still can't believe I wore those parachute
pants when I was a kid...lol. I used to love going to the Skating rink
with them on and breakdancing with my friends (oh man...I may be giving
away 'Too Much Information' on that one [:)

Steve: Thankfully I never bought a pair of parachute pants. But
rollerskating, navy blue corduroys, concert jerseys and feathered hair? Oh
yeah, that's me. Or that "was" me. Stuck in the '80s started as a podcast
(and it's still a podcast on iTunes that people can listen to for free).
And then it expanded into a blog and Facebook group too. Basically, I began
it because I worked in the Web department of my newspaper (the great St.
Petersburg Times), and I wanted a way to do "work" that didn't seem like
work. Ta-dah! Let's just talk about the '80s! When I found out people
around the world were listening in, that was a huge rush. I think what
inspires me about the '80s is that it was our last true era of innocence
and safety. Plus, it's personal to me because I spent my formative years
there. I began high school in 81 and finished college in 89.

Steve: I absolutely agree with Simon. In fact, if Simon tells me to grow my
hair back out long enough to feather it again and to put on parachute
pants, I'd be headed to Chess King right now. The Hall is controlled by the
stuffed shirts at Rolling Stone magazine, and they lost their cool factor a
LONG time ago. That's what I say DD shouldn't be too upset about not being
included at this point.

Kirk, DDTTRH: Tell us more about what you do with the St. Petersburg
Times?

Steve: I'm the daily entertainment editor for the paper. If Lindsey Lohan
sneezes, I'm there with a tissue. I also get to interview celebs when they
come to town for the paper. Naturally I go for all the '80s acts. Among my
favorites to interview to date: AC/DC's Brian Johnson, Howard Jones, Human
League's Phil Oakey and Rick Springfield. All the interviews are available
on the podcast. They're great fun to listen to.

Kirk, DDTTRH: This is an off-the-wall question...hope you don't mind...so
you know that I'm from Cleveland, right? Its depressing up here without
Lebron James (well...and without the sun these days with all the
snow--please send us some!). I hope you guys in Florida are happy with him
(grrrrr) [: [:. How do you think Cleveland can hold onto something after
the departure of Lebron?

Steve: Let me let you in no a little secret. In Tampa Bay, where I live, we
absolutely HATE Miami and pro basketball in general. Trust me when I say
Lebron and Miami were meant for each other.

Kirk, DDTTRH: I am assuming you grew up in the 80's, right? What exciting
experiences have you had with 'Stuck in the 80's so far? Have you met any
of your idols?

Steve: Oh sure. Almost everyone I interview I also meet in person. Pete
Byrne of Naked Eyes sang a song for me backstage. And I e-mail back and
forth with Martha Quinn all the time. And during the worst breakup of my
life, Valley Girl's Debbie Foreman called me and helped me through it. It's
not a bad life being stuck in the '80s!

Kirk, DDTTRH: Thanks so much Steve for promoting our effort and our
petition. What wisdom would you impart to us at DDTTRH as we continue this
amazing journey?

Steve: Don't say a prayer for Duran Duran now. Save it for the morning
after they get inducted!

Thanks so much Steve for interviewing with us!

To follow Steve at his newspaper...go to this link!

To learn more about Duran Duran to the Rock Hall and to sign our petition, please go to www.ddttrh.info and click 'Sign Petition'!
Posted by ddrockhall at 2:47 AM 0 comments